Vivian Reed At Feinstein’s/54 Below 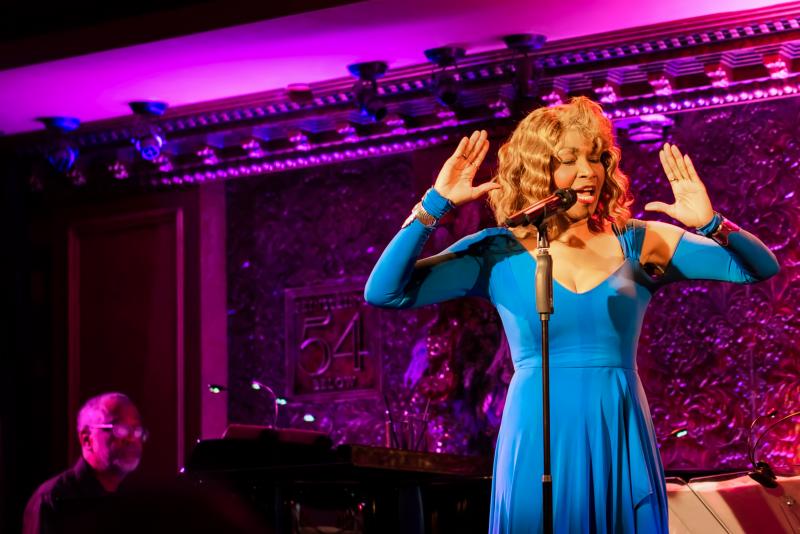 The moment Vivian Reed takes to the Feinstein’s/54 Below stage, she welcomes the audience in a loving embrace—one of those rare artists who genuinely feels what she performs, and whose grace and rigor blend into an expressive whole with which one cannot help but fall in love. For her latest concert series, Reed commemorates the birthday centennial of Lena Horne by shining an assortment of songs for which Horne was so well known through the prism of new arrangements. Filling out the spectrum are pianist William Foster McDaniel, bassist Calvin Jones, drummer Damon Duewhite, and guitarist Don Tipton, in whose hands that prism is tilted to catch the light just so at every turn of phrase.

As the affirmations of Stephen Sondheim’s “Old Friends” glide into the room, so does Reed into frame, a splash of blue against the groovy red carpet laid down by her band. Having thus set the tone for a fabulous evening, Reed and company gallivant their way through the Great American Songbook with all the right moves. Finding joy in sunshine (“On A Wonderful Day Like Today”) and stormy weather alike (“Singin’ In The Rain”), Reed elicits an ebony tone and intonation with a voice as classic as it is fresh. In numbers like “A Fine Romance” (From Swing Time) and “Believe In Yourself,” she balances scintillating wit and inspiration—both hallmarks of her artistry. Whether vocally cartwheeling through the upbeat blues of “Come Runnin'” or icing the cake of “The Lady Is A Tramp,” Reed brings out the best in her musicians. Tipton hits every melodic target in tandem with a robust rhythm section, while McDaniel holds down the fort. In fact, Reed shares a handful of duets with the piano man, including the phenomenal diptych of “Lover Man (Where Can You Be)/The Man I Love” and “The Nearness Of You,” for which she walks through the audience, holding hands to close the circle of a beautiful evening.

Above all, it’s a performance given with the respect with which Reed narrates Horne’s biography between songs. We follow via Reed’s evocative brushwork as Lena goes from Cotton Club dancer to civil rights activist, living a life of daring influence along the way. In the latter vein, Reed’s take on Marvin Green’s “Now” speaks with more relevance than ever. As also clear in her rendition of “Stormy Weather,” Reed knows that to reach the light one must trudge through darkness. She is the light at the end of this tunnel, awaiting with gifts of a better future.