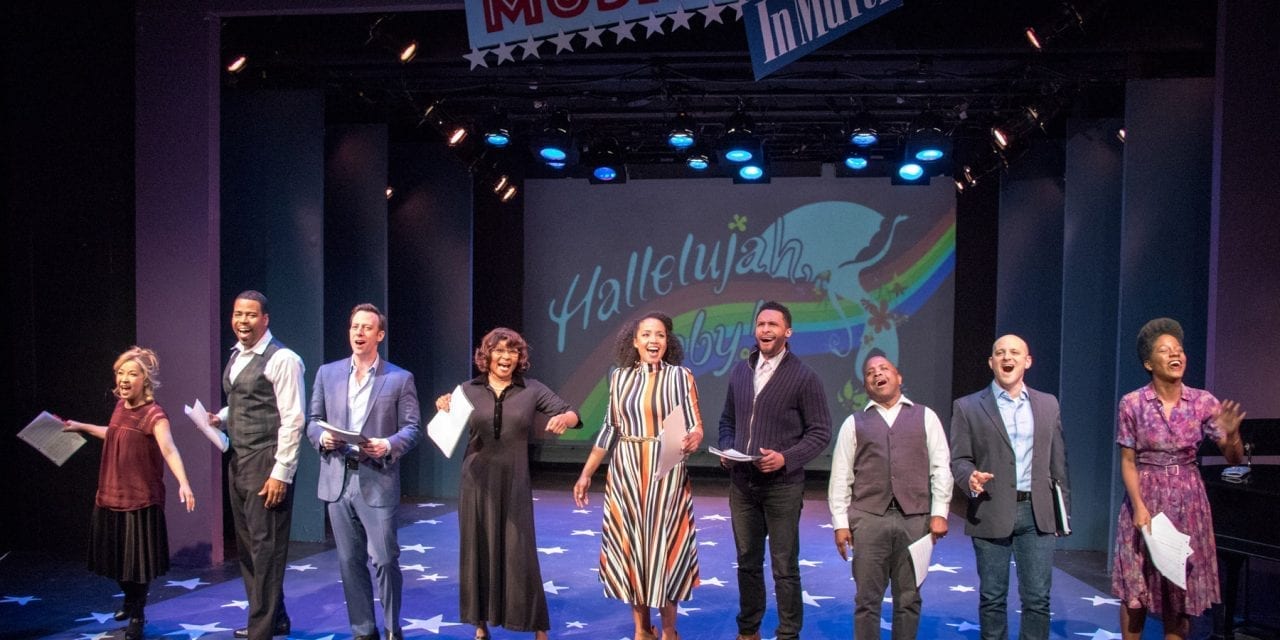 The cast of “Hallelujah Baby”, at the York Theatre Company photo: Ben Strothmann

The great thing about an old school Broadway musical is — it’s old school.  Unabashedly hitting the stage with big show tunes, touching ballads, lots of harmony and dazzle, it declares itself with pride.  Hallelujah, Baby! is one such classic.  With its broad, melodic Jule Styne music and clever lyrics by Betty Comden and Adolph Green, this show exudes Broadway.

In a daring choice, this upbeat musical tackles the sober topic of racism in America, that miserable hydra that just refuses to die.  In a show within a show, where the main character also acts as narrator, Hallelujah, Baby! tells the story of Georgina (Stephanie Umoh) an ambitious young black woman trying to make it as a singer.  Spanning a succession of decades the narrative’s conceit is that while time may pass, Georgina and the other characters will not age.  The curtain rises on Georgina the star, rehearsing a flashy production number.  Breaking from the tableau, Georgina introduces herself to the audience and we spring backwards in time to the year 1910, where it all began.  Georgina’s Momma (Vivian Reed) is reading Georgina the riot act, trying to restrain her from striking out on her own.  The dangers of challenging the discrimination that tightly proscribed the lives of black Americans at the time are too great.  Still, Georgina cannot quell her yearning for more.

With her irrepressible drive Georgina profits from even the smallest opportunity. You believe in her the moment Umoh steps onstage.  With beauty, elegance and a versatile, big stage voice, Umoh is razzmatazz in leading lady form.  Georgina’s love interest Clem (Jarran Muse) finds himself chasing after Georgina, trying to keep up with her life.  Muse acts with heartfelt commitment but he sounded a little under the weather vocally.  It is a shame that Clem exists mostly in apposition to others; we are limited to seeing him through their eyes and not on his own.  Another satellite to Georgina’s dynamic presence is Harvey (Tally Sessions).  Representing himself as a producer (and by ‘producer’ he means ‘stage manager’), Harvey, who is white, hires Georgina at a time when blacks and white actors could not appear on the same stage.  Of course they are both fired because of it, but Harvey becomes Georgina’s champion.  As Harvey, Tally Sessions electrifies the stage.  With taught energy and an inner life that helps to fill out a somewhat underwritten role, he is an unexpectedly romantic character man.

Vivian Reed injects quirkiness and drama into her role as Momma.  Funny and snarky by turns, Momma is yet wise in her experience.  At the show’s beginning, in her servant’s garb and dutiful “Yes, Ma’m,” she lives in the shadow of her apron and mop.  In Act II, however, when Reed lets her hair down in an hilarious show stopper that takes full advantage of her prodigious vocal and comedic abilities, you cheer.  No-one will ever put Momma in the corner again.

Several actors appear in a variety of small roles throughout the show.  Michael Thomas Holmes made me nearly jump out of my skin on his first entrance.  (Projection will never be an issue for him.)  Playing everything from racist producer to nerdy fan, he juggles several personalities, as does Jennifer Cody.  Cody plays a variety of silly fun women but my favorite is her Communist activist newsboy.  Another multi-tasker, Latoya Edwards, sparkles, but too briefly.  Georgina’s back-up dancers Tip (Bernard Dotson) and Tap (Randy Donaldson) make a good team, their contrasting height and vocal color adding to their charm.

This is a script-in-hand concert with some movement.  Musicals in Mufti’s goal in using this stripped-down format is to introduce us to some dormant gem of a musical, not stage a full-scale revival.  Musical Director and pianist David Hancock Turner and bassist Richie Goods provide all of the accompaniment.  It is a huge task they handle well.  Justin West keeps the set design simple, projecting a handful of context establishing images onto the backdrop and the stage floor.

Some of the material feels a bit dated and the balance of book to music feels a bit off.  It could use some judicious trimming.  In addition, Georgina carries the majority of the show, in a veritable marathon of singing that risks wearing us out.  Nonetheless, Hallelujah, Baby! is a terrific show.   As it examines each decade’s take on discrimination, this musical does not shy away from racism’s ugliness, but neither does it give in to hopelessness.  The combination of tuneful ballad and musical fanfare salutes the resolve that has carried people through, time and again.  It is Georgina’s ambition set to music.