Blues in the Night reviewed by Rob Stevens 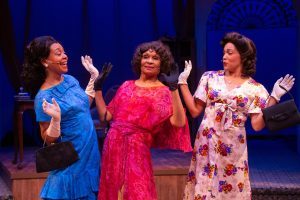 Long before he began his twenty-year run as Artistic Director at the Pasadena Playhouse, Sheldon Epps conceived and directed the musical revue Blues in the Night which had a short run on Broadway in 1982. Nearly 40 years later, International City Theatre in Long Beach, partnered with the Ebony Repertory Theatre in Los Angeles, has staged a lively, energetic, musically perfect revival that has audiences clapping along, desperate to be dancing in their seats and cheering the quartet of performers and five-piece onstage band. Blues in the Night is the musical audiences have wanted and needed after 18 months of Covid isolation from live theater. Director Wren T. Brown has masterfully staged the show aided by choreographer Keith Young who has provided the right steps at the perfect time. Scenic designer Edward E. Haynes Jr.’s simple yet elegant depiction of three hotel rooms and lobby in a 1948 Chicago hotel perfectly frame the action. Donna Ruzika’s painterly lighting contributes the right mood for each song, whether it be a brightly lit ensemble number or bluesy solo sung in a soft-focus spot. Kim DeShazo’s colorful and varied period costumes fit each character perfectly. Musical Director William Foster McDaniel leads the quintet of talented musicians. The second act begins with a Jam Session and each band member—Fernando Pullman on trumpet, Scott Mayo on woodwinds, Del Atkins on bass, Clayton Cameron on drums as well as McDaniel on piano—gets to strut their stuff to the audience’s delight. 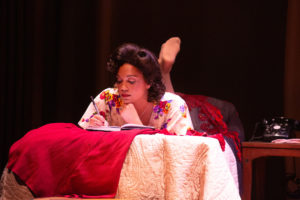 Chester Gregory embodies the role of Man in the Saloon with a cocky assurance and sly, devilish charm perfect for such songs as “I’m Just a Lucky So-And–So”. He also joins his female castmates in a sterling rendition of the title song. Jenna Gillespie Byrd is The Girl with a Date, the hotel’s newest resident. Her youth, energy and enthusiasm is infections in her songs from “Taking A Chance on Love” to “Willow Weep for Me”. 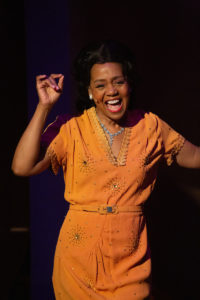 Karole Foreman is the sophisticated if world weary Woman of the World, with a French phrase on the tip of her tongue and a never empty glass of wine in her hand. Her mellow, sensual voice purrs its way through such songs as “Lush Life” but she shows she can get down and dirty with “Rough and Ready Man”. The vocal blending of Byrd, Foreman and Vivian Reed is sublime in songs ranging from “It Makes My Love Come Down” and “Nobody Knows You When You’re Down and Out”. 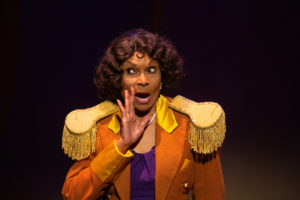 Vivian Reed is a true force of nature as the tired but still eager to perform Lady from the Road. She can rip your heart to shreds with “Lover Man” then bust your gut with laughter when she channels her innate raunchiness in “Kitchen Man” and “Take Me for a Buggy Ride”. Her bluesy tone reaches gospel level belt in a nanosecond. She delivers a musical performance for the ages with the intensity and craftmanship of a Jennifer Holliday or a Patti Lupone. She is not to be missed and neither is Blues in the Night. It’s the perfect show to play two distinct venues locally. You have been warned. Miss it at your own peril.